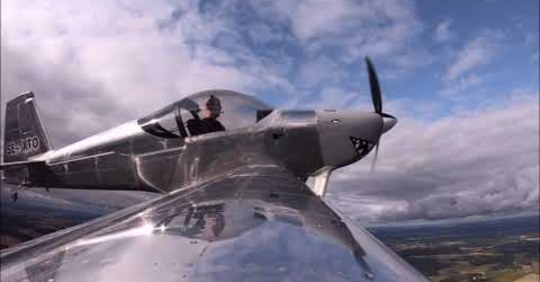 Congratulations to Magnus on the first flight of his RV-14!

After enjoying building the aircraft for almost five and a half year it was finally time to fly. I built the aircraft in my garage, next to my house, mainly on late evenings when the kids had gone to sleep. I would not have been able to complete the build if traveling had been necessary.

The first flight was amazing, it felt like I was in the air in no time. Flight controls just felt perfect! CHT briefly hit 340 during the initial climb before bringing the power down to 75-80%, they then stayed at 300 +/-10 for the entire flight. Very happy about that.

Whether allowed me to initially cruise between 3000-4500 feet, after an hour the clouds pushed me down to 2000-2500. After the first hour my com transmissions started having more and more static so my planned two hour flight was shortened by 30min.

The flight ended with a rather smooth tail low landing, I was aiming for a 3-pointer.