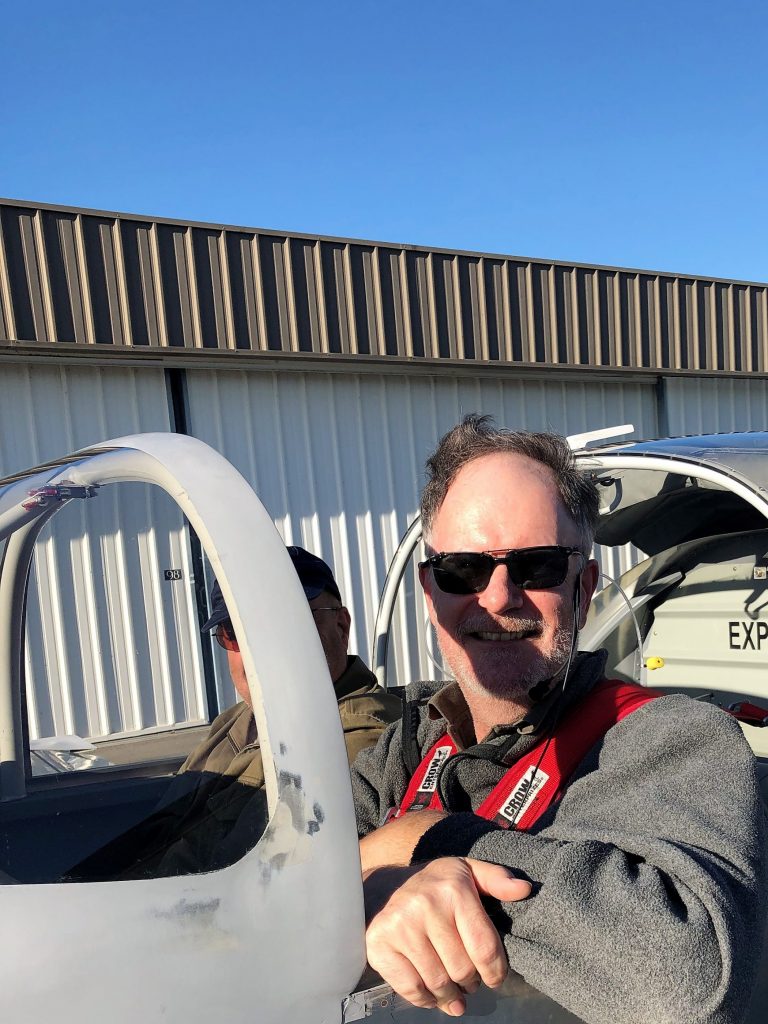 RV-9A N748PK’s airborne debut was a complete success, except for a glitch in not-as-redundant-as-I-thought avionics.

Barry flew the takeoff from runway 25R while kept an eye on the cylinder temps. Climbing to pattern altitude at 100 KIAS, the Aerosport Power IO-320-D2A’s cylinders were just starting to reach 400F as we turned downwind. We continued climbing through the roof of the class Delta, orbiting in a glide cone about the airport. The number 2 cylinder won the thermometer contest, topping out at 426F when we leveled off at 5000 MSL, then all temps declined to the high 390’s.

Basic handling in roll, pitch, and yaw checked out with 5 KIA increases up to 120. Then it was time to breathe, and the builder took the controls for several laps. Just like the $60,000 free ride I took at the factory some 14 years ago, the gentlest nudge on the stick smartly banked the airplane and the nose tracked the horizon with no discernible back-pressure, while the ball was dead center with my lazy feet flat on the floor.

I gave the controls back to Barry to resume slow flight test points. We had just completed 70 KIAS when I noticed the PFD and MFD in my all-glass cockpit were both very…steady. The faux analog gauges and digital readouts weren’t changing at all. Barry’s a smooth pilot for sure, but nobody is _that_ smooth!

PF: [pause] “You realize the empty acreage on this panel could support a backup ASI, at least?”

Just then the PFD went dark and started re-booting, and soon both screens indicated normally again. We decided we’d had enough excitement for the first flight and soon Barry absolutely greased it on.

Back at the hangar, the PFD coughed up some interesting event codes and it’s already back to its maker for FA, repair, or replacement. I’ll be digging into just how dependent the supposedly independent displays really are and hoping there’s an attractive Oshkosh special on a truly independent EFIS to be had. Other than that, the airframe is just about as good as this first-time ultra-slow builder always hoped for. I’ve attached a mandatory grin pic, and I assure you I had so much more hair when I started the project!