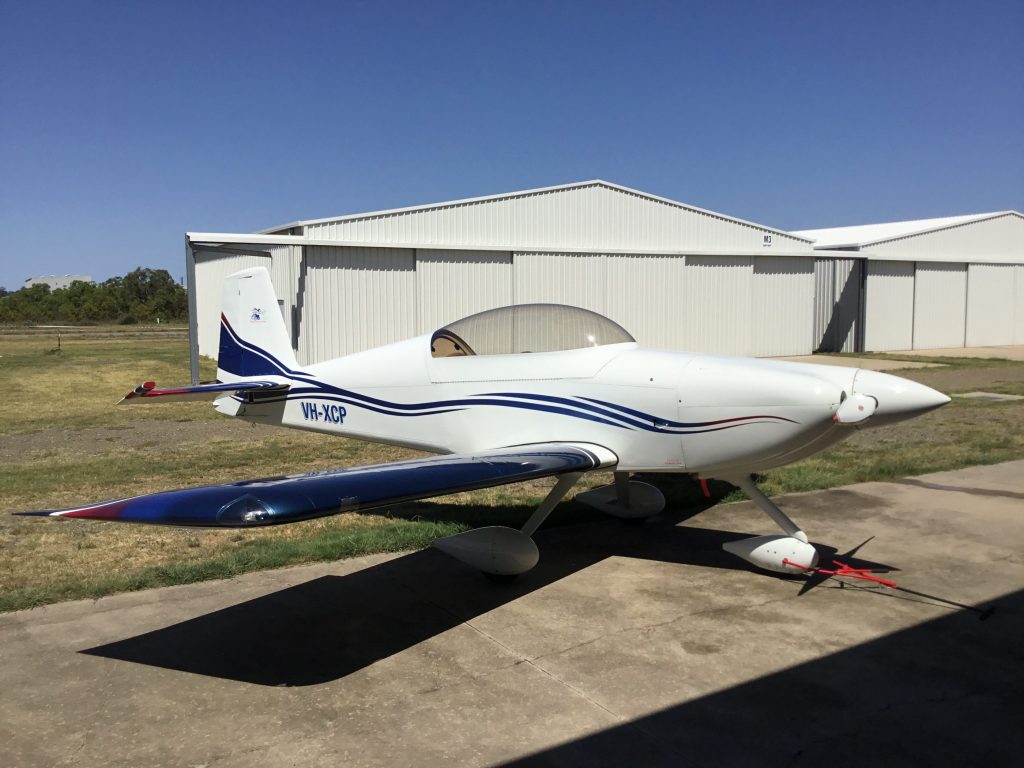 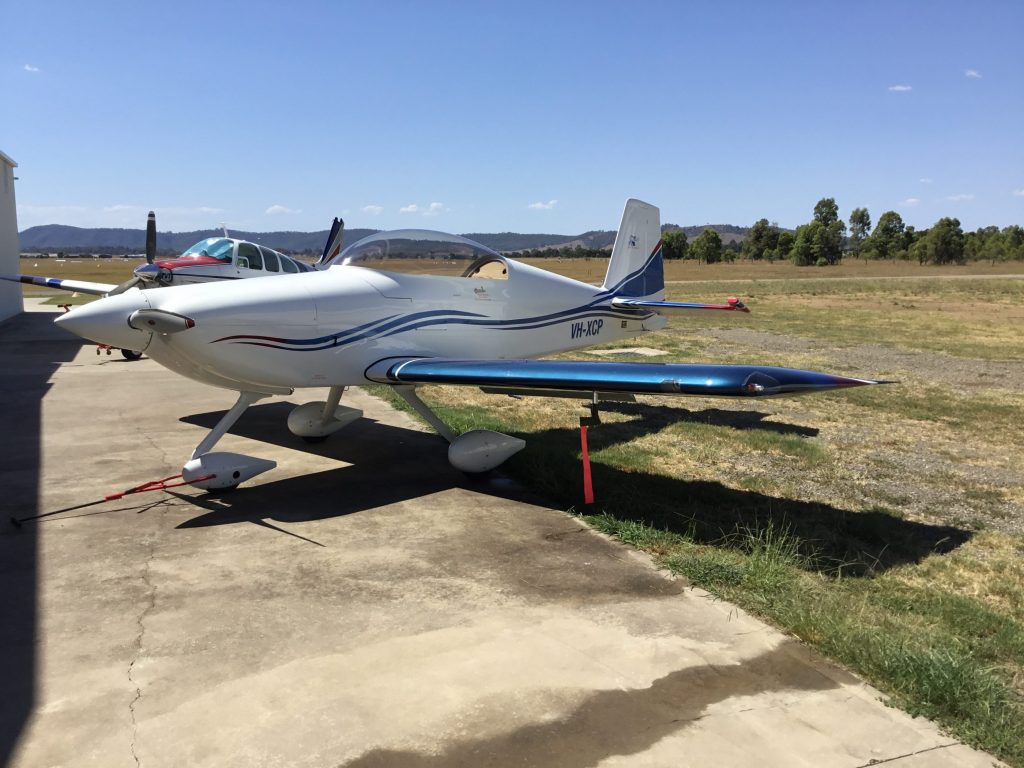 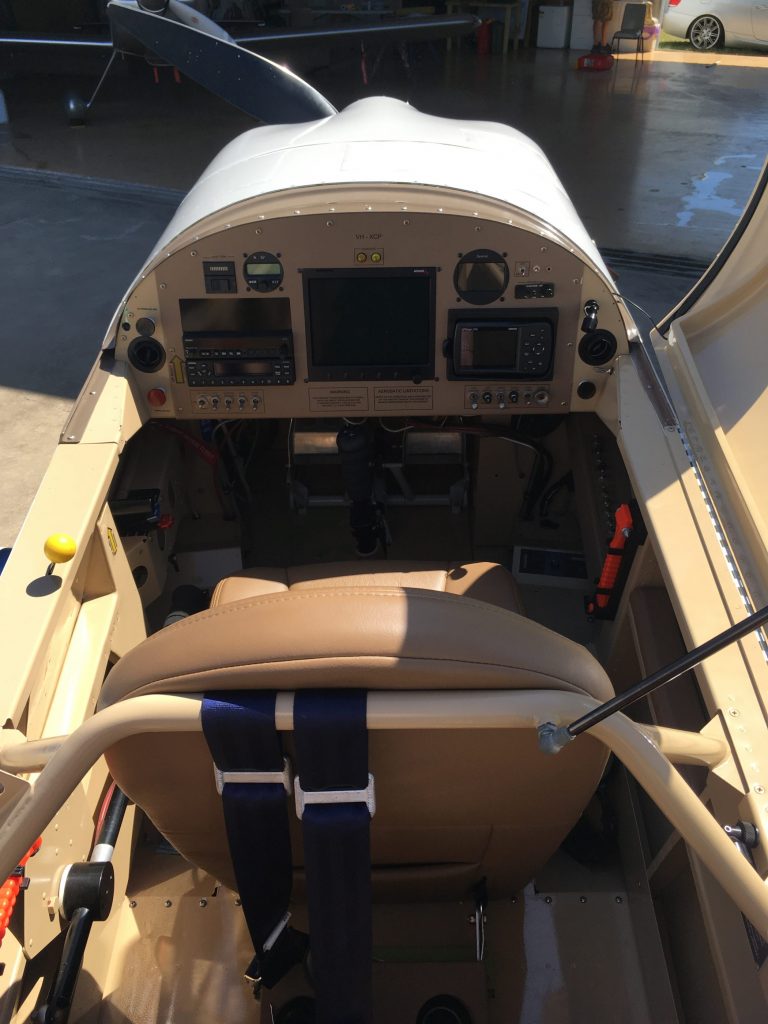 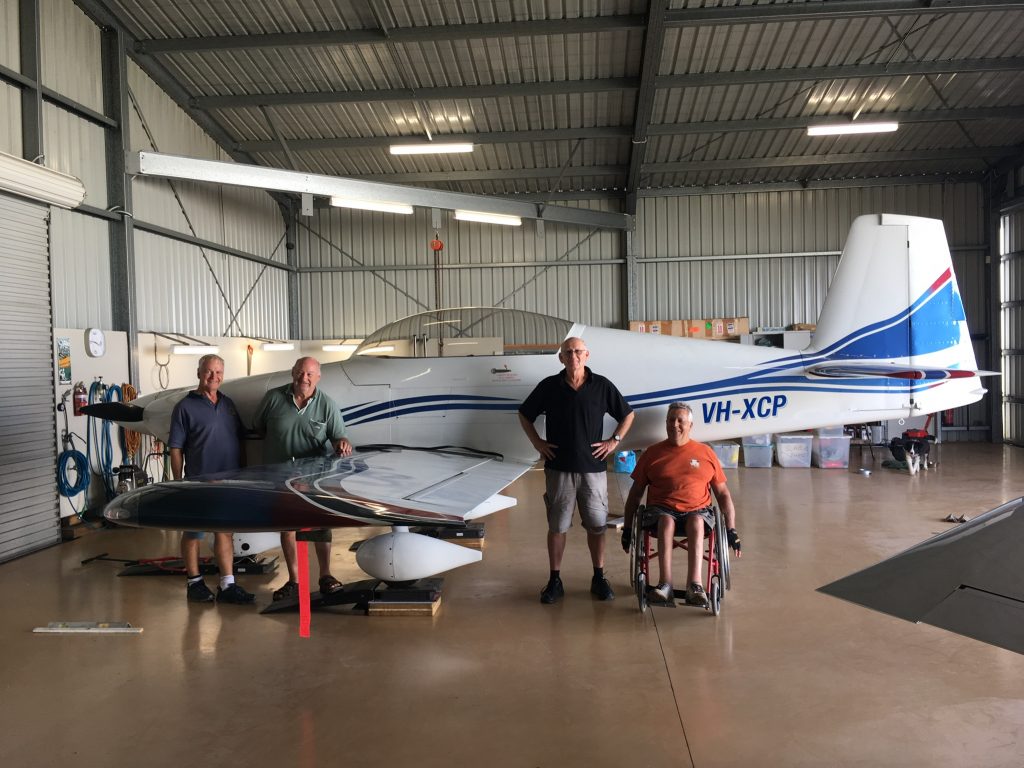 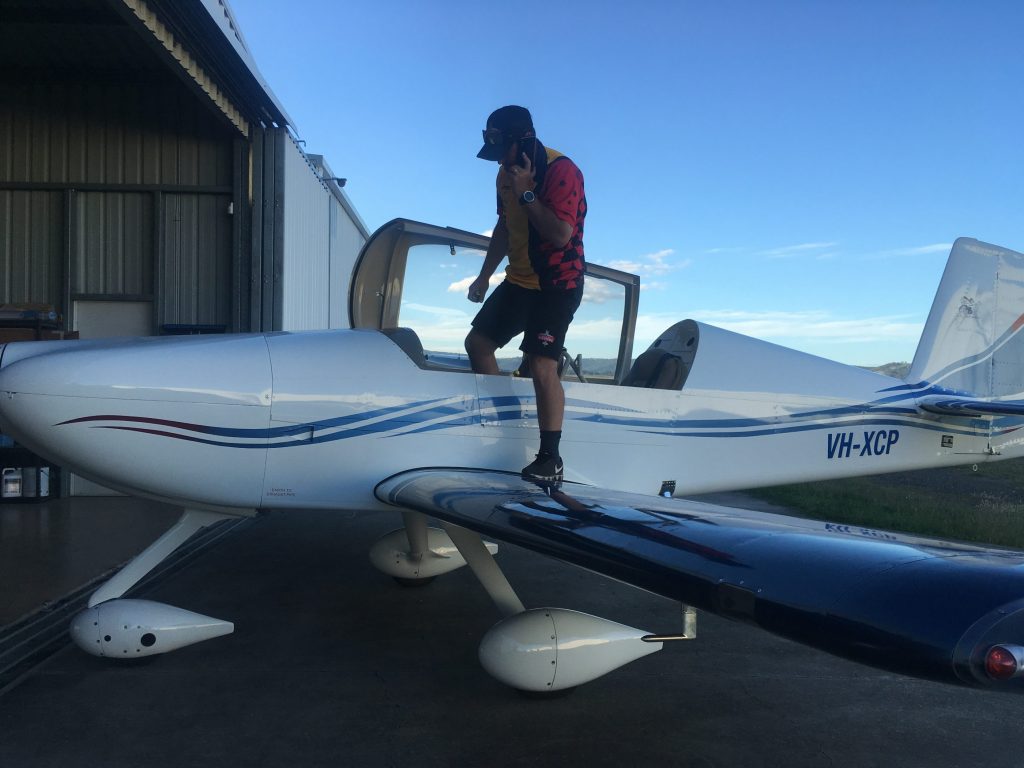 Every RV story is special, but Mr Princeton’s RV-8A story is especially so. Congratulations and happy flying!

It’s done; after 14 years my modified RV-8A, VH-XCP had its first flight on 26th April 2019 at the controls of my friend and celebrated Air Show Pilot Paul Bennet at our home airfield in the Hunter Valley in New South Wales, Australia.
Apart from slightly elevated CHT’s the aircraft performed flawlessly and I am now learning how to control it with my own designed hand controls for the brake and rudder.

My love affair with aviation began at a very young age. I am a baby boomer to an ex RAAF wartime fitter who was always interested in aeroplanes, and I believed passed on this passion to me.

When I was about 8 years of age dad built a small low wing control line aeroplane with a 1.5cc engine and we used to fly it on Sunday mornings in a park near our home, alerting the passion to fly.

However, at the age of 25 I was seriously injured resulting in me becoming paraplegic requiring the use of a wheelchair. This resulted in a long period of recovery, the learning of new skills to earn a wage and the loss of a lot of the leisure activities I once had and seemingly negated any prospects of ever becoming a pilot.

Aviation and particularly radio control came to the forefront again and good radio sets were now commercially available. Dad and I, with my younger brother took to this hobby like ducks to water, but there remained this nagging desire to fly bigger aeroplanes. My younger brother learned to fly a C150 and then successfully joined the airforce as a pilot, ultimately going on to be a Mirage 111 fighter pilot and my dad went on to obtain his license at the age of 63. I was held back because of lack of money, a young family and a growing business, not to mention the purchase of an aircraft that I would have to modify for hand controlled rudders and brakes.

When aged about 45 and whilst at work one morning, my brother phoned me from the airbase where he was based and told me that they had a flying club there but no aeroplane. The deal was that if I bought an aeroplane and placed it at the club they would teach me to fly for free. As money was tight the only way I was ever going to be able to fly was to have a working aeroplane and free lessons.

Well, what an opportunity, all I had to do was find and buy an aeroplane and find and fit hand controls, a task in its own right.

I had been made aware of an organization in California, the Californian Wheelchair Aviators, later called the International Wheelchair Aviators, (IWA) a group of ex US Marine aviators that had been injured whilst deploying ejection seats in the early jet fighters. These seats often resulted in the pilot becoming paraplegic. The IWA had developed a series of hand controls, mostly for PA28 aircraft and were very willing to help me. Following lots of research I decided to purchase a PA28 Warrior, and had some modifications made to the steering gear and fitted a portable hand control.

By early 1990 I was ready to fly and I was taking weekly weekend lessons at our local RAAF base. By this time my brother had retired from the RAAF and was flying B747’s. Dad had also purchased a BE33 Bonanza and he and Mum travelled all over the country. We did flying safaris all over eastern Australia forging many new friendships. Wanting ever more speed, I had hand controls designed and built for Dad’s Bonanza and finally managed how to land it in a cross wind. I really needed three hands for this as it was a very challenging task, but I got there in the end. I then purchased a PA-32RT-300T Turbo Lance 2 with a good friend and that was a whole new dimension again. Unfortunately he was killed at the Lance sold.

The Turbo Lance was gone, the Warrior was away working and dad was always using the Bonanza, so I had very little choice for an aeroplane to fly. During this dark period another friend said ‘why don’t you build an RV’? What is that I asked and my wife asked ‘where is the money coming from’?

We visited another local airfield and looked at a finished RV-6A and decided that I could not get hand controls in it as there was insufficient room and it was difficult to climb over the side. I also thought he was crazy wanting us to rivet all that metal together. However, within a week he convinced me that I should buy an RV-8A kit as there was more room in the cockpit and we would modify it as needed. He was an airframe builder for the RAAF and said it would be no problem; we have the knowhow he said.

So, In January 2005 with little research I ordered an RV-8A Quickbuild, is there any such thing? No, says my wife, and the home double garage was set up for the build and my wife’s car was put out in the cold.

The first parts arrived in February 2005 and according to the wife, we were like kids on Christmas morning, opening all the boxes and crates etc, and so, we set forth building the empennage, a task that I really enjoyed and became proficient at working metal with the tutorage of my RAAF mate. During this time I really began to think about how I was going to set up the hand controlled rudder and brakes.

Shortly after I visited Canada, Alaska and Oregon with my wife and called in on a paraplegic wheelchair aviator in Portland, Oregon. He took me flying in his RV-6 and to Van’s Headquarters. He had built his airplane from a flat pack kit and designed and fitted the hand controls himself. He had done over 1000 hours in it and he was a great wealth of knowledge and inspiration and became a firm friend.

It was whilst boarding his RV-6 over the side that we both thought there needed to be a better option as we were both turning 60 years of age and it was becoming very difficult to lift into the cockpit.

On returning home I started to conceive a Spitfire type door to the cockpit which would also require canopy changes. This led me to buying an aftermarket ‘Show Planes Fast Back and Cowl’ kit as the side tilt canopy allowed the cutout of the gunwale. No big problem, just like cutting the side out of a tinnie and then turning it into a race boat. The solution was to engage John Stewart Jones, an Aircraft Engineer, who did the necessary engineering. As John would say, “we’ll just add a little bit more tin here and there.” If only it was that simple.

It is true to say that my Van’s, VH-XCP, is truly experimental for not only have we added the aftermarket add-ons but also designed and installed a door in the port side and a hand control for the rudders and brakes and extended the rear luggage area to allow for my wheelchair.

The build with the early modifications proceeded at a cracking pace with the help of some mates until in the third year of my build we had a cyclonic storm on 7 June 2007 which nearly wiped out my home city and surrounds and resulted in the flooding of my place of business and my home to which the garage turned aircraft workshop was attached.

The casualties were not only my home and office, the loss of cars but also flooding of my RV and many parts. It meant that we had to move out of the home and it took another 10 months before the RV build resumed. I would like to thank my many aviation friends who helped clean up the mess and secure, clean, protect and store my partly built project.
When work resumed it was at a more leisurely pace after the hectic period of reinstating my business premises and renovating and moving back into our home. It was now time to share with the family including overseas holidays which completely stopped the building for a month either side of the holiday, an activity I needed to share with my suffering wife whose main job at weekends had been to prepare lunch and coffee for the boys in the shed building the aeroplane.

My father and mentor passed away in 2008 so I purchased his beloved BE33 Bonanza from his estate. This took the pressure off building the RV as I now had something to fly and it also became another project as it was then about 40 years old. It has turned 52 years of age in my ownership and I too am very attached to it and it has continued to be a project, maintaining and updating it with time. It is a beautiful aircraft in which to tour Australia.

In 2012 we moved home to an apartment and the RV components were sent to the paint shop but resulted in another 10 months lost with no building. When building resumed in 2013 it was at our local airfield YMND in a hangar I share with Bob, a Sport Aircraft Association of Australia Technical Counselor & Pilot Advisor, who regularly cast his expert eye over me and tried to keep me safe when heading off in the Bonanza.

When I thought the airplane was finished in 2015 (90% done and 90% to go) I needed two shoulder replacements, 6 months apart. That was another year lost, then there were more overseas holidays, then last year when almost ready for my C of A inspection I broke my leg which resulted in an amputation, so there was another 3 or 4 months lost.

I am now conducting taxi trials post first flight and making some minor adjustments to the hand controls and sorting the bugs. Although it has been a very long build it has mostly been enjoyable and when it became a task I set it aside and did other things. Although I have not personally flown it yet I did get the RV grin after I managed to sort out how to taxi it.
I expect to do my first flight shortly after I am confident with the operations of the hand controls.