People interested in seeing the new mount and gear in-person can do so at the Van’s Aircraft booth during the AirVenture 2019 convention in Oshkosh, Wisconsin.

June 20, 2019 – Van’s Aircraft has announced availability of a new engine mount and gear option for specific configurations of the RV-7A and RV-9A, incorporating design features used on the company’s more recent RV-10 and RV-14A aircraft models. Builders have the option to choose either the new style system, which is the default choice for new orders, or they may choose to build using the original gear and mount system when ordering their finish kits. 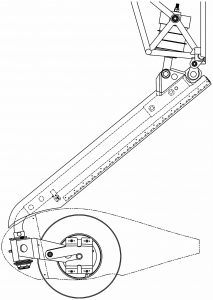 Original owners of not-yet-installed RV-7A or -9A finish kits that were received on or after June 1, 2017 may contact Van’s Aircraft to discuss exchange options, should they wish. Builders of an RV-6A kits may order new finish kit components from the RV-7A and adapt to their airframe, if they wish to do so.

The following aircraft/engine combinations are supported for new builds. Please note that retrofit installations are covered in a different document (see Service Letter 19-04-30) and introduce additional complexity. Note that we can only describe support for Lycoming engines as provided by Van’s. If you have a custom engine other than a Lycoming model Van’s sells, you’ll need to provide additional details to help us process your finish kit order. The new design is available with Dynafocal I (D1) engine mounts only.

The RV-10 and RV-14A designs include an engine mount/nose gear assembly consisting of a mount that accepts a pivoting nose gear arm, which articulates at the base of the mount and is attached using elastomer discs and retention hardware. This mount/gear system design has been proven effective on those models and is commonly requested by customers who’d like to use it on earlier model kits. To meet that demand, we have adapted the design to the RV-7A and RV-9A. RV-6A builders wishing to use the new mount/gear design may follow the RV-7A plans since the engine mounts and gear are common parts between the two models, but will likely need to make adjustments and adapt firewall component installation as required.

Both gear design options – original and new – are available for builders to choose from when ordering. The new style gear is the default option for all new kit orders.

Van’s Aircraft can provide parts to aircraft owners who wish to retrofit the new mount and gear system to an existing airplane. The company has published a document describing the new system and the various potential issues and complexities involved in a retrofit project. That document also includes some details and results related to the change on the factory’s RV-9A demonstrator aircraft, which has been flying with the new system in place since earlier this year. This information can be found in Service Letter 19-04-30 on the Van’s Aircraft web site.